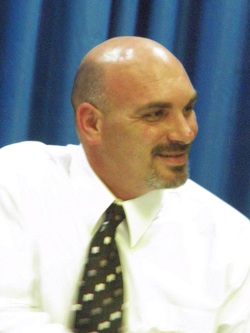 _Adam Santo is the author of the novel Temperature: Dead and Rising. Follow him on Goodreads,  Twitter, MySpace,  Shelfari,  Wordpress , Amazon Author's Page, Adam's Blog, and the Author's Den to name a few.
So far you're wondering who the heck is this guy. Well, I ask that same question everyday to myself but nobody cares to comment back. When the mime in me finally replies you will be the second to know it.
For what it's worth - I have had a passion for writing since I was a teenager. Had I known what I do know I would have chased after that dream of creative writing, but alas, as any teen would tell you, "I have better things to do with my life right now - like stand around the mall's food court for starters."
Yes, just stood there. We really never did anything except eat at the food court and stretch out across the benches the mall provided. Such was the life as a youth. What cares would I have to worry about? Come to think of it now I have rent, bills, food to put in the refrigerator, gas for the car, a car payment ..... you get the point. No one under eighteen, mostly, cares what will come when free room and board disappear. Sure roommates work out for a while, however, in the long run a person gets tired of picking up all the pizza boxes the next morning to prepare for that night's date. I think I have run off on a tangent. Sorry.
I joined the Army a few years after getting out of high school. The funny thing about it was I had originally went to the recruitment center to enlist into the Air Force. They weren't open that day, but the Army's doors were. As it was, I didn't last long in the military and so I moved on to installing cable (my choices for a new career the Army's MOS offered dwindled down to a tank driver - not much out there for that kind of work). I fixed cable TV for 13 years before I made time to finish my novel.

That folks is my life in a nutshell.